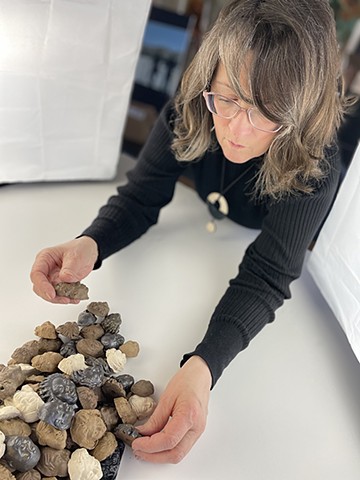 ARTIST STATEMENT and BIO Educated at Herron School of Art and Design in Indianapolis Indiana, Katrina Murray graduated with a major in painting a minor in art history and studied for a time in Italy.

Murray lived for over three years in Germany (Deutschland) during the mid 80s. While there, fallout from the Chernobyl atomic reactor meltdown blaze in 1986 drifted into West Germany where she lived. In that time too, demonstrations against the “American occupation” took place during the birth of her youngest daughter, forcing the birth to take place in a German hospital rather than in a hospital on a military base where her, then, husband was stationed. Murray found herself in a hospital room with two other mothers. All three spoke different languages but had the same needs. This poignant experience made a lasting impression on her.

Murray began her current work after her son was killed in the Iraq war by an IED in 2005. Murray went back to college (Herron School of Art and Design) to use art to heal emotionally. Learning a new way to live with her pain.

Through the use of ceramic, collage, and found objects, as well as humor and confrontation, she invites us to reflect on how we, individually and as a society, weigh our political views on the issues that divide our country – such as gun laws, women’s reproductive freedom, and LGBTQ and racial equality – against the greater human consequences. Murray’s experiences with bias, both personally-held as well as observed, have shaped her artistic investigation of the differences and similarities between us.

Murray is a cross disciplinary, conceptual based artist with a deep interest in the emotional and physical human condition. She explores ideas around human nature, power, and vulnerability, focusing primarily on the way we frame our sense of self regarding current cultural discourse.

A native of the historic arts area of Brown County, Indiana, Murray now lives and works in Indianapolis, IN.